1) Freakonomics: a rogue economist explores the hidden side of everything

2) Think like a freak: the authors of Freakonomics offer to retrain your brain

Author
Dubner, Stephen J
Language
English
eBook
Show Edition
Available Online
Check Out Hoopla
Source
Hoopla
Available Online
More InfoCheck Out Hoopla
Description
Read Description
As a boy, Stephen J. Dubner's hero was Franco Harris, the famed and mysterious running back for the Pittsburgh Steelers. When Dubner's father died, he became obsessed-he dreamed of his hero every night; he signed his school papers "Franco Dubner." Though they never met, it was Franco Harris who shepherded Dubner through a fatherless boyhood. Years later, Dubner journeys to meet his hero, certain that Harris will embrace him. And he is . . . well,...
More Info
SHARE

5) When to rob a bank: ...and 131 more warped suggestions and well-intended rants

Author
Levitt, Steven D
Language
English
eAudiobook
Show Edition
Available Online
Check Out Hoopla
Source
Hoopla
Available Online
More InfoCheck Out Hoopla
Description
Read Description
The New York Times bestselling Freakonomics was a worldwide sensation, selling more than four million copies in thirty-five languages and changing the way we look at the world. Steven D. Levitt and Stephen J. Dubner return with Superfreakonomics, and fans and newcomers alike will find that the freakquel is even bolder, funnier, and more surprising than the first. SuperFreakonomics challenges the way we think all over again, exploring the hidden side...
More Info
SHARE

Author
Levitt, Steven D
Language
English
eAudiobook
Show Edition
Available Online
Check Out Hoopla
Source
Hoopla
Available Online
More InfoCheck Out Hoopla
Description
Read Description
Which is more dangerous: a gun or a swimming pool? What do schoolteachers and sumo wrestlers have in common? How much do parents really matter? These may not sound like typical questions for an economist to ask. But Steven D. Levitt is not a typical economist. He studies the riddles of everyday life-from cheating and crime to parenting and sports-and reaches conclusions that turn conventional wisdom on its head. Freakonomics is a groundbreaking collaboration...
More Info
SHARE

8) Gang Leader for a Day

Author
Venkatesh, Sudhir
Language
English
eAudiobook
Show Edition
Available Online
Check Out Hoopla
Source
Hoopla
Available Online
More InfoCheck Out Hoopla
Description
Read Description
The story of the young sociologist who studied a Chicago crack-dealing gang from the inside captured the world's attention when it was first described in Freakonomics. Gang Leader for a Day is the fascinating full story of how Sudhir Venkatesh managed to gain entrée into the gang, what he learned, and how his method revolutionized the academic establishment. When Venkatesh walked into an abandoned building in one of Chicago's most notorious housing...
More Info
SHARE 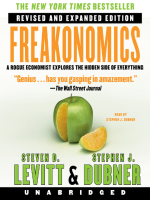 10) Freakonomics Revised and Expanded: A Rogue Economist Explores the Hidden Side of Everything

Steven D. Levitt and Stephen J. Dubner offer the long-awaited paperback edition of Freakonomics, the runaway bestseller, including six Freakonomics columns from the New York Times Magazine and a Q & A with the authors.