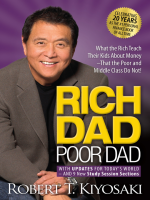 It's been nearly 25 years since Robert Kiyosaki's Rich Dad Poor Dad first made waves in the Personal Finance arena.
It has since become the #1 Personal Finance book of all time... translated into dozens of languages and sold around the world.

Rich Dad Poor Dad is Robert's story of growing up with two dads — his real father and the father of his best friend, his rich dad — and the ways in which both men shaped