Return of the Primitive: The Anti-Industrial Revolution
(eAudiobook) 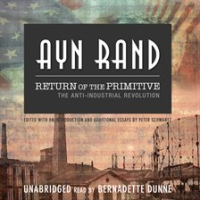