In the President's Secret Service: Behind the Scenes with Agents in the Line of Fire and the Presidents They Protect
(eAudiobook) 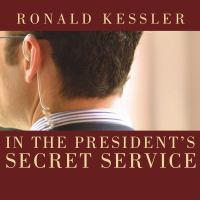