The Great Depression Ahead: How to Prosper in the Crash That Follows the Greatest Boom in History
(eAudiobook) 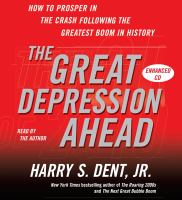