SEAL Target Geronimo: The Inside Story of the Mission to Kill Osama bin Laden
(eAudiobook) 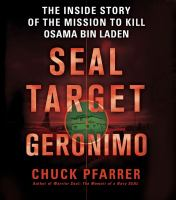