Tombstone: The Earp Brothers, Doc Holliday, and the Vendetta Ride from Hell
(eAudiobook) 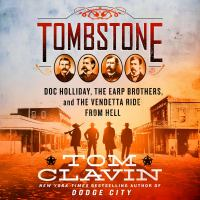