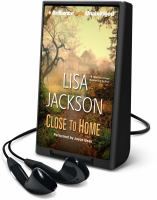 General Note
In container (19 x 14 x 3cm.).
General Note
1 AAA battery and headphones required for use, but not supplied by library.
General Note
"HD."
General Note
"LIGHT."
General Note
In container (19 x 14 x 3 cm.)
General Note
Previously released by Brilliance Audio.
General Note
Issued on Playaway, a dedicated audio media player.
Creation/Production Credits
Director: Stephen Helderman ; Recording engineer: Martin Woessner.
Participants/Performers
Performed by Joyce Bean.
Description
Vowing to make a fresh start, Sarah McAdams has come home to renovate the old Victorian mansion where she grew up. Her daughters, Jade and Gracie, aren't impressed by the rundown property on the shores of Oregon's wild Columbia River. As soon as they pull up the isolated drive, Sarah too is beset by uneasy memories--of her cold, distant mother, of the half-sister who vanished without a trace, and of a long-ago night when Sarah was found on the widow's walk, feverish and delirious. Ever since the original mistress of the house plunged to her death almost a century ago, there have been rumors that the place is haunted. As a girl, Sarah sensed a presence there, and soon Gracie claims to see a lady in white running up the stairs. Still, Sarah has little time to dwell on ghost stories, between overseeing construction and dealing with the return of a man from her past. But there's a new, more urgent menace in the small town. One by one, teenage girls are disappearing. Frantic for her daughters' safety, Sarah feels her veneer cracking and the house's walls closing in on her again. Somewhere deep in her memory is the key to a very real and terrifying danger. And only by confronting her worst fears can she stop the nightmare roaring back to life once more.