Written in my own heart's blood a novel
(Playaway) 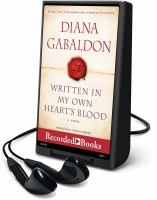 General Note
Title from container.
General Note
"HDAUDIO."
General Note
"LIGHT."
General Note
Previously released by Recorded Books, LLC, p2014.
General Note
Issued on Playaway, a dedicated media audio player.
General Note
1 AAA battery and headphones required for use, but not supplied by library.
Participants/Performers
Narrated by Davina Porter.
Description
1778: France declares war on Great Britain, the British army leaves Philadelphia, and George Washington's troops leave Valley Forge in pursuit. At this moment, Jamie Fraser returns from a presumed watery grave to discover that his best friend has married his wife, his illegitimate son has discovered (to his horror) who his father really is, and his beloved nephew, Ian, wants to marry a Quaker. Meanwhile, Jamie's wife, Claire, and his sister, Jenny, are busy picking up the pieces. The Frasers can only be thankful that their daughter Brianna and her family are safe in twentieth-century Scotland. Or not. In fact, Brianna is searching for her own son, who was kidnapped by a man determined to learn her family's secrets. Her husband, Roger, has ventured into the past in search of the missing boy, never suspecting that the object of his quest has not left the present. Now, with Roger out of the way, the kidnapper can focus on his true target: Brianna herself.