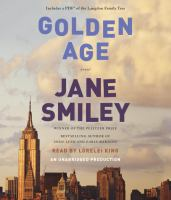 General Note
Compact disc.
General Note
Title from container.
General Note
Includes a PDF of the Langdon family tree.
General Note
Sequel to: Early warning.
Participants/Performers
Read by Lorelei King.
Description
"When Golden Age opens in 1987, the next generation of the Langdon family is facing economic, social, cultural, and political challenges unlike anything their ancestors had encountered before. Richie and Michael, the rivalrous twin sons of Frank, the golden son and World War II hero, have grown into men, and the wild antics of their youth slide seamlessly into a wilder adulthood in finance on Wall Street and in government in Washington, D.C. Charlie, the mysterious young man we met in Early Warning who was revealed to be an unknown son of the Langdon clan, adds light and joy to the family, but gets caught up in the tragedy of the 9/11 attacks. Meanwhile, back on the family's Iowa homestead, the rich soil, tilled since 1920 when patriarch Walter planted his corn and oats, has been eroded by decades of continuous farming and now is threatened by climate change. Throughout the three decades that this novel comprises, with Smiley gazing into her crystal ball toward 2019 at its conclusion, we see how the Langdon children we've come to know and love--Frank, Joe, Lillian, Henry, and Claire--make room as adults for their own children and grandchildren as they face an uncertain future. Taking us through events monumental and quotidian, personal, national, and international, in a breathtaking mix of suspense and nostalgia, character and atmosphere, Golden Age brings an enduring portrait of a single remarkable family to a triumphant end, even as it raises a beloved American author to new heights"--,Provided by publisher.
System Details
Adobe Reader required. PC and Mac compatible.