The magic strings of Frankie Presto a novel
(Playaway) 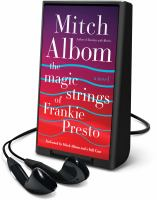 General Note
1 AAA battery and headphones required for use, but not supplied by library.
General Note
In container (19 X 14 x 3 cm.).
General Note
"LIGHT."
General Note
"HDAUDIO."
General Note
Previously released by HarperCollins Publishers, ℗2015.
General Note
Issued on Playaway, a dedicated audio media player.
Participants/Performers
Performed by Mitch Albom and a full cast.
Description
In his most stunning novel yet, the voice of Music narrates the tale of its most beloved disciple, young Frankie Presto, a war orphan raised by a blind music teacher in a small Spanish town. At nine years old, Frankie is sent to America in the bottom of a boat. His only possession is an old guitar and six precious strings. But Frankie