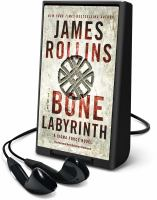 General Note
1 AAA battery and headphones required for use, but not supplied by library.
General Note
In container (19 X 14 x 3 cm.).
General Note
"LIGHT."
General Note
"HDAUDIO."
General Note
Originally released by Harper Audio ℗2015
General Note
Issued on Playaway, a dedicated audio media player.
Participants/Performers
Performed by Christian Baskous.
Description
"In this groundbreaking masterpiece of ingenuity and intrigue that spans 50,000 years of human history, New York Times bestselling author James Rollins takes us to mankind's next great leap. But will it mark a new chapter in our development. or our extinction? A war is coming, a battle that will stretch from the prehistoric forests of the ancient past to the cutting-edge research labs of today. In the remote mountains of Croatia, an archaeologist makes a strange discovery: a subterranean Catholic chapel, hidden for centuries, holds the bones of a Neanderthal woman. In the same cavern system, elaborate primitive paintings tell the story of an immense battle between tribes of Neanderthals and monstrous shadowy figures. Who is this mysterious enemy depicted in these ancient drawings, and what do the paintings mean? Before any questions can be answered, the investigative team is attacked, while at the same time, a bloody assault is made upon a primate research center outside of Atlanta. How are these events connected? Who is behind these attacks? The search for the truth will take Commander Gray Pierce of Sigma Force 50,000 years into the past. As he and Sigma trace the evolution of human intelligence to its true source, they will be plunged into a cataclysmic battle for the future of humanity that stretches across the globe. and beyond. With the fate of our future at stake, Sigma embarks on its most harrowing odyssey ever--a breathtaking quest that will take them from ancient tunnels in Ecuador that span the breadth of South America to a millennia-old necropolis holding the bones of our ancestors. Along the way, revelations involving the lost continent of Atlantis will reveal true mysteries tied to mankind's first steps on the moon. Gray Pierce and his team will face their greatest threat: an ancient evil, resurrected by modern genetic science, strong enough to bring about the end of man's dominance on this planet. Only this time, Sigma will falter--and the world we know will change forever. One of James Rollins's most ambitious stories to date, The Bone Labyrinth combines science, adventure, historical mystery, archaeology, technology, and legend in a brilliantly inventive tale that connects early man and the fate of the Neanderthals, while exploring the evolution of human intelligence from its wellspring to where we, as a species, may be headed next. Full of ingenious twists, it is a pulse-pounding epic from a master storyteller at the pinnacle of his creative powers"--,Provided by publisher.