City of secrets a novel
(Playaway) 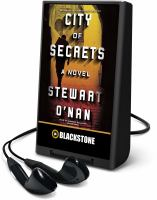 General Note
1 AAA battery and headphones required for use, but not supplied by library.
General Note
In container (19 X 14 x 3 cm.)
General Note
"LIGHT."
General Note
"HDAUDIO."
General Note
Previously released by Blackstone Audio, Inc., ℗2016.
General Note
Issued on Playaway, a dedicated audio media player.
Participants/Performers
Read by Edoardo Ballerini.
Description
"In 1945, Jewish refugees by the thousands set out for Palestine. Those who made it relied on the underground to shelter them; taking false names, they blended with the population, joining the wildly different factions fighting for independence. "City of Secrets" follows one survivor, Brand, as he tries to regain himself after losing everyone he's ever loved. Now driving a taxi provided--like his new identity--by the underground, he navigates the twisting streets of Jerusalem as well as the overlapping, sometimes deadly loyalties of the resistance. Alone, haunted by memories, Brand tries to become again the man he was before the war--honest, strong, capable of moral choice. He falls in love with Eva, a fellow survivor and member of his cell, and commits himself to the revolution, accepting missions that grow more and more dangerous even as he suspects he's being used by his cell's dashing leader, Asher. By the time Brand understands the truth, it's too late." -- jacket.