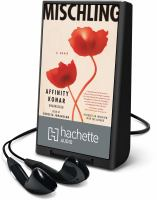 General Note
1 AAA battery and headphones required for use, but not supplied by library.
General Note
In container (19 X 14 x 3 cm.).
General Note
"LIGHT."
General Note
"HDAUDIO."
General Note
Previously released by Hachette Audio, ℗2016.
General Note
Issued on Playaway, a dedicated audio media player.
Participants/Performers
Read by Vanessa Johansson.
Description
It's the fall of 1944 when twelve-year-old twins Pearl and Stasha Zamorski are sent to Auschwitz with their mother and grandfather. In their benighted new world, the sisters take refuge in their identical natures, comforting themselves with the private language and shared games of their childhood. Catching the eye of Josef Mengele, Auschwitz's infamous "Angel of Death," and becoming part of an experimental population of twins known as Mengele's Zoo, the girls experience privileges and horrors unknown to other prisoners. They find themselves changed, stripped of the personalities they once shared, their identities altered by the burdens of guilt and pain. That winter, at a concert orchestrated by Mengele, Pearl disappears. Stasha grieves for her twin but clings to the possibility that Pearl remains alive. When the camp is liberated by the Red Army, Stasha and her companion Feliks--a boy bent on vengeance for his own lost twin--travel through Poland's devastation. Undeterred by injury, starvation, and the chaos around them, motivated equally by danger and hope, they encounter hostile villagers, Jewish resistance fighters, and fellow refugees, their quest enabled by the notion that Mengele may be captured and brought to justice within the ruins of the Warsaw Zoo. Their hearts mapped with longing, the young survivors discover what has become of the world, and they try to imagine a future within it.
Action
cc,2016-21-12,JD