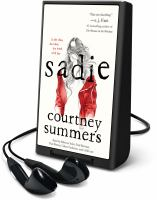 General Note
1 AAA battery and headphones required for use, but not supplied by library.
General Note
In container (19 X 14 x 3 cm.).
General Note
"LIGHT."
General Note
"HDAUDIO."
General Note
Title from Playaway label.
General Note
Originally released by Macmillan Audio ℗2018
General Note
Issued on Playaway, a dedicated audio media player.
Participants/Performers
Read by Rebecca Soler, Fred Berman, Dan Bittner, Gabra Zackman, and a full cast.
Description
Sadie's been raising her sister Mattie in an isolated Colorado town, trying her best to provide a normal life and keep their heads above water. When Mattie is found dead, and the police investigation is botched, Sadie is determined to bring her sister's killer to justice. She hits the road following a few meager clues. When West McCray, a radio personality working on a segment about small, forgotten towns in America, hears Sadie's story, he becomes obsessed with finding the missing girl. He starts his own podcast as he tracks Sadie's journey, trying to figure out what happened, hoping to find her before it's too late-- adapted from jacket.
Action
cc,2018-11-08,JD