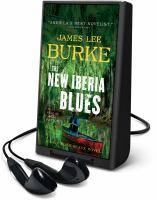 General Note
1 AAA battery and headphones required for use, but not supplied by library.
General Note
In container (19 X 14 x 3 cm.).
General Note
"LIGHT."
General Note
"HDAUDIO."
General Note
"Simon & Schuster Audio."
General Note
Previously released by Simon & Schuster Inc., ℗2019.
General Note
Issued on Playaway, a dedicated audio media player.
Participants/Performers
Read by Will Patton.
Description
"Detective Dave Robicheaux's world has few happy stories, but Desmond Cormier's rags-to-riches tale is one of them. Robicheaux first met Cormier on the streets of New Orleans, when the young boy had foolish dreams of becoming a Hollywood director. Twenty-five years later, when Robicheaux knocks on Cormier's door, it isn't to congratulate him on his Golden Globe and Academy Award nominations. Robicheaux has discovered the body of a young woman who's been crucified, wearing a small chain on her ankle, near Cormier's Cypremort Point estate. Neither Cormier nor his enigmatic friend Antoine Butterworth are saying much, but Robicheaux knows better. Complicating matters is the unexpected arrival of Robicheaux's new partner, Bailey Ribbons. Ribbons, a former middle school teacher, is just twenty-eight years old, but the perfect complement to Robicheaux. Perhaps too perfect, as the line between professionalism and romance begins to blur for the aging detective. They catch a break when Robicheaux's longtime friend Clete Purcel clues them in on the daring escape of Texas inmate Hugo Tillinger, who might hold the key to the case. As they wade further into the investigation, they end up in the crosshairs of the Mob, menaced by the deranged Chester Wimple, and haunted by the dark ghosts Robicheaux has been running from for years. Ultimately, it's up to Robicheaux to stop them all, but he'll have to summon a light he's never seen or felt to save himself and those he loves."--,Provided by publisher.
Action
cc,2019-01-30,JD