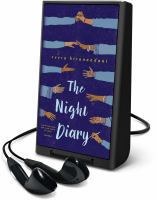 General Note
1 AAA battery and headphones required for use, but not supplied by library.
General Note
In container (19 X 14 x 3 cm.).
General Note
"LIGHT."
General Note
"HDAUDIO."
General Note
Title from Playaway label.
General Note
Previously released by Listening Library/Penguin Random House LLC, ℗2019.
General Note
Issued on Playaway, a dedicated audio media player.
Participants/Performers
Read by Priya Ayyar, with a note read by the author.
Description
"On the eve of her twelfth birthday, Nisha receives a journal -- a place to record the thoughts she can never seem to say aloud as she starts to see the world through older eyes. But it's not just Nisha who is changing. She doesn't even recognize her country anymore. It's 1947, and India, newly freed from British rule, is being divided into two countries: Pakistan and India. Many people are killed crossing borders as tensions among Hindus, Muslim, Sikhs, and others flare. Nisha doesn't know which side she's supposed to be on or why she has to choose. After losing her mother, who died giving birth, she can't imagine losing her homeland, too. Mama was Muslim, but now she's gone. Papa is Hindu, and says it's no longer safe for them to stay in Pakistan. And so Nisha and her family become refugees and embark on a dangerous journey by train and by foot to reach their new home on the other side of the border."--,Provided by publisher.
Action
cc,2019-05-23,JD