The poet X a novel
(Playaway) 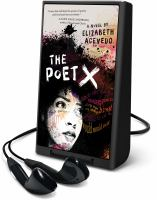 General Note
1 AAA battery and headphones required for use, but not supplied by library.
General Note
In container (19 X 14 x 3 cm.).
General Note
"LIGHT."
General Note
"HDAUDIO."
General Note
"Harper Audio."
General Note
Previously released by HarperCollins Publishers, ℗2018.
General Note
Issued on Playaway, a dedicated audio media player.
Participants/Performers
Read by the author.
Description
"Xiomara Batista feels unheard and unable to hide in her Harlem neighborhood. Ever since her body grew into curves, she has learned to let her fists and her fierceness do the talking. But Xiomara has plenty she wants to say, and she pours her frustration onto the pages of a leather notebook, reciting the words to herself like prayers -- especially after she catches feelings for a boy in her bio class. With Mami's determination to force her daughter to obey the laws of the church, Xiomara understands that her thoughts are best kept to herself. When she is invited to join her school's slam poetry club, she knows that she could never get around Mami's rules to attend, much less speak her words out loud. But still, she can't stop thinking about performing her poems. Because in spite of a world that may not want to hear her, Xiomara refuses to be silent."--,Provided by publisher.
Action
cc,2019-05-17,JD
Awards
Pura Belpré Author winner, 2019