The world that we knew a novel
(Playaway) 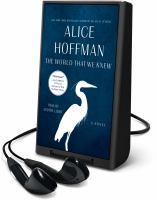 General Note
1 AAA battery and headphones required for use, but not supplied by library.
General Note
In container (19 X 14 x 3 cm.).
General Note
"LIGHT."
General Note
"HDAUDIO."
General Note
"Simon & Schuster Audio."
General Note
Previously released by Simon & Schuster, Inc., ℗2019.
General Note
Issued on Playaway, a dedicated audio media player.
Participants/Performers
Read by Judith Light.
Description
"At the time when the world changed, Hanni Kohn knows she must send her twelve-year-old daughter Lea away to save her from the Nazi regime. She finds her way to a renowned rabbi, but it's his daughter, Ettie, who offers hope of salvation when she creates a mystical Jewish creature, a rare and unusual golem, who is sworn to protect Hanni's daughter. Once Ava is brought to life, she and Lea and Ettie become eternally entwined, their paths fated to cross, their fortunes linked. Lea and Ava travel from Paris, where Lea meets her soul mate, to a convent in eastern France known for its silver roses, to a school in the mountaintop village where three thousand Jews were saved. Meanwhile, Ettie is in hiding, waiting to become the fighter she's always known she's destined to be. "--,Provided by publisher.
Action
cc,2019-09-28,JD

Hoffman, Alice,, and Judith Light. The World That We Knew: A Novel Unabridged., Findaway World, LLC, 2019.