A spark of light a novel
(Playaway) 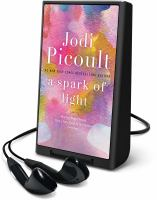 General Note
1 AAA battery and headphones required for use, but not supplied by library.
General Note
In container (19 X 14 x 3 cm.).
General Note
"LIGHT."
General Note
"HDAUDIO."
General Note
"Random House Audio."
General Note
Previously released by Penguin Random House LLC, ℗2018.
General Note
Issued on Playaway, a dedicated audio media player.
Participants/Performers
Read by Bahmi Turpin, with a note read by the author.
Description
"The warm fall day starts like any other at the Center, a women's reproductive health services clinic. Then, in late morning, a desperate and distraught gunman bursts in and opens fire, taking all inside hostage. After rushing to the scene, Hugh McElroy, a police hostage negotiator, sets up a perimeter and begins making a plan to communicate with the gunman. As his phone vibrates with incoming text messages he glances at it and, to his horror, finds out that his fifteen-year-old daughter, Wren, is inside the clinic. But Wren is not alone. She will share the next and the most tense few hours of her young life with a cast of unforgettable characters: A nurse who calms her own panic in order to save the life of a wounded woman, a doctor who does his work not in spite of his faith but because of it, a pro-life protester, disguised as a patient, who now stands in the crosshairs of the same rage she herself has felt, a young woman who has come to terminate her pregnancy, and the disturbed individual himself, vowing to be heard"--,Provided by publisher.
Action
cc,2019-10-17,JD

Picoult, Jodi, and Bahni Turpin. A Spark of Light: A Novel Unabridged., Playaway, 2018.