Venom. Let there be Carnage
(Blu-ray) 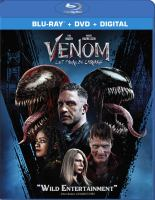