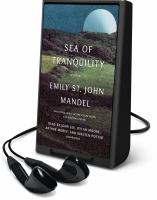 General Note
1 AAA battery and headphones required for use, but not supplied by library.
General Note
In container (19 X 14 x 3 cm.).
General Note
"LIGHT."
General Note
"HDAUDIO."
General Note
Issued on Playaway, a dedicated audio media player.
General Note
Originally published by Penguin Random House Audio ℗2021
Participants/Performers
Read by John Lee, Dylan Moore, Arthur Morey, and Kirsten Potter.
Description
"Edwin St. Andrew is eighteen years old when he crosses the Atlantic by steamship, exiled from polite English society following an ill-conceived diatribe at a dinner party. He enters the forest, spellbound by the beauty of the Canadian wilderness, and suddenly hears the notes of a violin echoing in an airship terminal-an experience that shocks him to his core. Two centuries later a famous writer named Olive Llewellyn is on a book tour. She's traveling all over Earth, but her home is the second moon colony, a place of white stone, spired towers, and artificial beauty. Within the text of Olive's bestselling pandemic novel lies a strange passage: a man plays his violin for spare change in the echoing corridor of an airship terminal as the trees of a forest rise around him. When Gaspery Roberts, a hotel detective in the black-skied Night City, is hired to investigate an anomaly in the North American wilderness, he uncovers a series of lives upended: the exiled son of an earl driven to madness, a writer trapped far from home as a pandemic ravages Earth, and a childhood friend from the Night City, who, like Gaspery himself, has glimpsed the chance to do something extraordinary that will disrupt the time line of the universe. A virtuoso performance."--,Provided by publisher
System Details
Playaway Digital Audio
Action
cc,2022-05-24,JD